Background and objectives: Systemic lupus erythematosus (SLE) is a systemic autoimmune disease that causes damage to many organs of the body. The balance between pro-inflammatory T-helper 17(Th17) and regulatory-T (Treg) cells play an important role in the pathogenesis of SLE. The aim of the study is to assess Th17/Treg ratio and their relation to disease activity in both adult and juvenile SLE patients on T -lymphocytes using flow cytometry.

Patients and methods: This study was carried out on 80 patients; 40 patients with adult SLE and 40 patients with juvenile SLE. Forty subjects were taken as control groups. All patients and control were subjected to history taking and measuring of Complete blood count (CBC), C3, C4, Antinuclear antibody (ANA), Anti ds-DNA and protein /creatinine ratio in urine and measurement of Th17 and Treg by flow cytometry.

Conclusion: Th17/Treg ratio is increased in active adult and juvenile SLE when compared with inactive SLE and control and thus this ratio may be used as a marker of disease activity.

Systemic lupus erythematosus (SLE) is a chronic autoimmune disease that affects all organs of the human body. The exact cause of SLE is still unknown, but several factors have been associated with disease (e.g. genetics, environment, and sex hormone factors) [1,2].

Th17 cells differentiate from naive CD4+ T cells by stimulation with antigen in the presence of TGF-Beta and IL-6. Th17 cells secret IL-17 and IL-22 [3]. The principal role of Th17 cells appears to be protection against extracellular bacterial and fungal infections through recruitment of neutrophils and other leucocytes. Studies in mice and humans suggested that Th17 cells may be important mediators of tissue damage in immune -mediated inflammatory diseases such as SLE [4,5].

Treg cells represent the other face of the coin in SLE pathogenesis [6]. Treg cells are a subset of CD4+ cells whose function is to suppress the immune response and maintain self-tolerance. The majority of Treg express high levels of CD25 but no other markers of T-cell activation. Treg cells are generated mainly by self-antigen recognition in the thymus but they also develop in the peripheral lymphoid organs. The generation and survival of Treg cells are dependent on TGFB-eta and IL-2 and stimulation by the B7 and CD28 pathway. [7].

Treg cells inhibit activation and effector function of auto reactive T-lymphocytes thus preventing the onset of aberrant self-immune response [8]. The balance between pro-inflammatory Th17 and Treg cells play an important role in the pathogenesis of SLE. The aim of this study to assess the balance between Th17 and Treg cells in SLE and its relation to disease activity in both adult and juvenile SLE patients.

Eighty healthy normal 40 adults and 40 children matched in age, gender, and geographical location, were used as the control.

Five ml of venous blood was collected by venipuncture and was divided into, 2 ml on EDTA tube for CBC and flow cytometric measurement of Th17 cells and Treg cells, 3 ml of blood on plain tube, allowed to be clotted and the serum was separated by centrifugation at 3000 rpm for assessment of serum creatinine, C3, C4, ANA, and Anti ds-DNA. A random urine sample was collected for assessment of protein/creatinine ratio.

Staining of Th17 was done by using bioligand Human Th17 Flowä Kit (anti-CD3 FITC/anti-CD4 PE/anti-IL-17 Per CP) according to the following protocol : 100 μl of blood was added into two tubes (test and control) and 0.5 ml of fixation reagent was added and incubation at room temperature for 20 minutes then centrifugation. The supernatant was removed. 2 ml of Intracellular Staining permeabilization reagent was added to each tube and incubated at room temperature for 20 minutes, then centrifugation and the supernatant was discarded. 20 μl of IL-17 per CP /CD3 FITC/CD4 PE was added into the test tube only and Isotype control antibody was added in the negative control tube and incubated at room temperature in the dark for 30 minutes. Washing twice with 2 ml Intracellular Staining Perm Wash Buffer, and re-suspend in 0.5 ml PBS and analyzed by flow cytometry [15].

Detection of Treg cells was done by using bioligand One Step Staining Human Treg Flowä (FOXP3 FITC/CD25 PE/CD4 PerCP) according to following protocol: 100 μl of blood was added into two tubes (test and control) and 0.5 ml of fixation reagent was added and incubation at room temperature for 20 minutes and centrifugation. The supernatant was removed and 2 ml of Intracellular Staining permeabilization reagent was added to each tube and incubated at room temperature for 20 minutes, then centrifugation and the supernatant was removed. 20 μl of FITC anti-human FOXP3/ CD25 PE/CD4 PERCP was added into the test tube only and Isotype control antibody was added in the negative control tube and incubated at room temperature in the dark for 30 minutes. Washing twice with 2 ml Intracellular Staining Perm Wash Buffer, and re-suspend in 0.5 ml PBS then analyzed by flow cytometry [16].

Table 1. Demographic and laboratory data of the studied groups.

Table 2. Lymphocyte Subpopulations of the studied groups, Note : the ratio Th17/Treg in the above table was calculated case by case (for each case individually),then the mean was calculated for the calculated ratios. 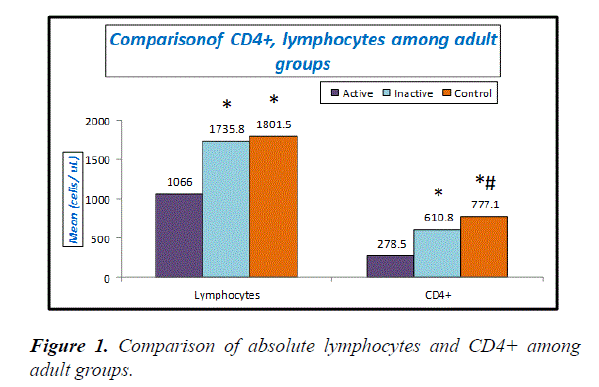 Figure 1. Comparison of absolute lymphocytes and CD4+ among adult groups. 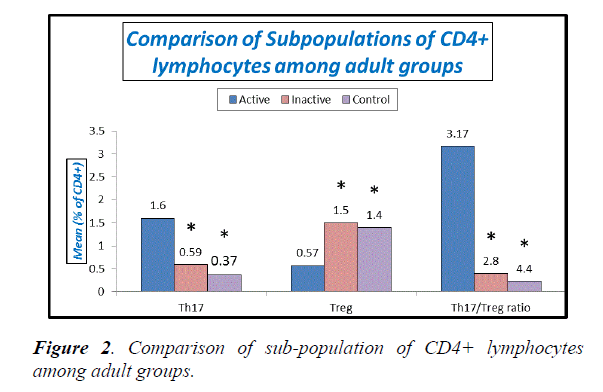 Figure 2. Comparison of sub-population of CD4+ lymphocytes among adult groups.

Table 4. Comparison between lymphocytes, CD4+, Th17, Treg and Treg/Th17 among active and inactive juvenile SLE patients and control, Note the ratio Th17/Treg in the above table was calculated case by case (for each case individually), then the mean was calculated for the calculated ratios. 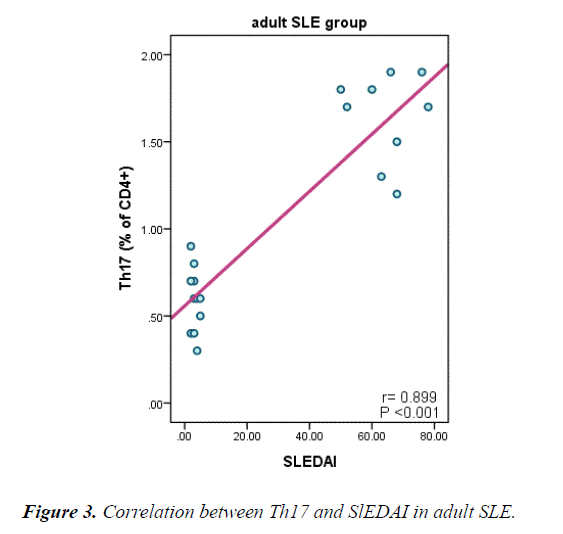 Figure 3. Correlation between Th17 and SlEDAI in adult SLE. 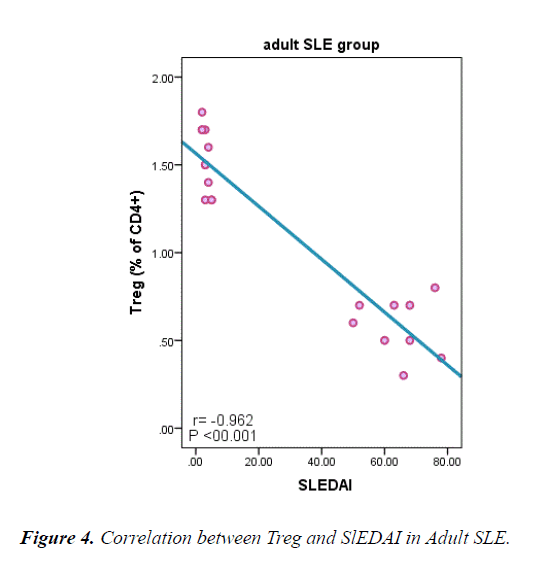 Figure 4. Correlation between Treg and SlEDAI in Adult SLE.

Systemic lupus erythematosus (SLE) is an autoimmune disorder affecting almost all organs and tissues of the body. T-helper 17 (Th17) cells are differentiated from native CD4+T and are characterized by the production of IL-17 and have been included in a list of autoimmune diseases such as SLE as they are responsible for the inflammatory response in these diseases [17].

The other face of the coin in the pathogenesis of SLE is Treg cells which are a subset of CD4 T cells whose functions is to suppress the immune response and maintain self-tolerance [18]. The etiology and pathogenesis of SLE disease are still unclear; however, it has been shown that the balance between Th17 and Treg cells is a paradigm which underlies the progression of clinical symptoms in SLE patients [19].

The balance between Th17 and Treg in SLE patients has been studied for many years and giving different results, this may be due to disease heterogeneity, the impact of immunosuppressive treatment or these studies included patients with different levels of disease activity.

Most studies about Th17 and Treg which studied their relation to (SLE) disease showed that the elevation of Th17 and reduction of Treg were thought to be the major factor of increasing production of autoantibodies and tissue damage in SLE patients [20,21]. Our study showed a significant difference in ANA, DNA, and protein/creatinine ratio between adults, juvenile groups and controls.

Treg cells in SLE patients have been studied in many studies but the results obtained still confusing in which, most studies showed a reduced number of Treg [21] and other studies showed that instead of a reduction of Treg, the percentage of Treg increased in active SLE patients [27,28]. However, these Treg cells in SLE patients were found to have impaired suppressive function to control the autoimmunity process in SLE disease [29], or the pro-inflammatory Th17 cells are resistant to suppression action of regulatory T cells. Due to the difference of the value of Th17 and Treg cells in patients with active SLE from one report to another constantly the ratio of TH17/Treg will differ. Some studies showed an increase in Th17/Treg ratio in adult active SLE when compared with inactive and control [30].

Another research group described an elevated ratio of Th17 to Treg in adult patients with active SLE with no evidence of an increase in the percentage of Th17 [31]. Also, Yang et al. showed a significant increase of Th17/Treg ratio in SLE patients which indicate that Treg is incapable of modulating Th17 differentiation [32]. The imbalance of Th17/Treg ratio toward the side of pro-inflammatory Th17 side has been found in many of autoimmune diseases such as rheumatoid arthritis (RA), multiple sclerosis (MS), inflammatory bowel disease (IBD), as well as systemic lupus erythematous (SLE) [33].

The study also indicated a significant correlation between TH17/Treg ratio and parameters of the disease activity. Positive correlation with ANA, ANT-DNA, protein/creatinine ratio and SLEDAI with negative correlation with C3 and C4. These results are in agreement with those observed by Xing, Talaat et al. and Ning et al. [23-25]. Circulating number of Treg is decreased in SLE with unknown reasons. Environmental factors such as ultraviolet light infection and cigarette smoking cause oxidative stress and increased production of IL-6 which may be the primary cause for a decrease in Treg in SLE [34,35].

Ultraviolet exposure can induce DNA damage generation of DNA photoproducts and apoptotic materials with activation of B cells and promote the differentiation of Th17 cells with production of IL-17 and aggravate lupus injury as IL-17 induces an inflammatory response [34,35]. Normally TH17/ Treg ratio stays in a dynamic immune balance Increased oxidative stress in SLE induce and expand the pro-inflammatory Th17 cells and inhibit the anti-inflammatory Treg cell differentiation and aggravate autoimmune injuries [34,35].

Many drugs which capable of modifying Th17/ Treg ratio have been shown to be effective in the autoimmune diseases and approved for treatment of some of autoimmune diseases [36,37]. Also, it was found that the Th17 cells are not uniform subset but consist of pathogenic and non-pathogenic cell population. The non-pathogenic Th17 cells has a physiologic role in the protection of intestinal barrier function [38]. The therapeutic strategies which depend on Targeting only pathogenic Th17 cells may be the next step for shifting Th17/ Treg ratio. Recently, several molecules which capable of modifying the Th17/Treg imbalance have shown promising results in animal models [39,40]. But they need more evaluation before tested in human.

In summary, several challenges are still required identifying the Th17/Treg targeted therapeutic strategy that will be effective for the treatment of autoimmune diseases as well as SLE disease. In conclusion, elevation in pro-inflammatory Th17 and reduction of Treg is highly correlated to SLE disease activity in both adult and juvenile SLE patients. Returning Th17/Treg cell balance may open new lines for SLE treatment.

Further studies about Th17/Treg imbalance are required at several levels of disease activity because most studies include patients of low activity level and early diagnosed SLE patients in which reports that included both adult and juvenile SLE patients are not found.