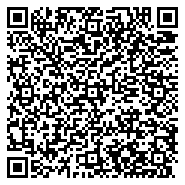 Background: Feeding intolerance in premature infants is one of the main causes of prolonged hospital stay. Thyroxine and motilin plays significant role in GI function. In this study, we evaluated the effectiveness of low dose thyroxine in feeding intolerance of preterm neonates.

Objective: To find out low dose thyroxine therapy in preterm infants ≤ 34 weeks with feed intolerance improve gastro oesophageal reflux, gastric emptying and reduces the feed intolerance, that will be reflected in decreased duration of hospital stay and improved weight gain.

Outcome and results: Time to achieve full feeds (140-150 ml/kg/day), weight gain per grams per day (20-30 grams/kg/day) were end point goals. Total preterm <34 weeks babies admitted were 474. Only 30 babies had feeding intolerance (incidence 6.5%). 15 babies in group 1 received low dose thyroxine on D1. Other group received on D8. There is statistically significant difference between both groups at both pre intervention and post intervention period in milk intake and weight at all times expect for weight difference on day 7.

Conclusion: Thyroxine supplementation is effective in improving the symptoms of abdominal distension and poor weight gain in preterm infants and therefore aid in neurodevelopmental outcome in premature infants.

Feeding intolerance in premature infants is one of the main causes of their long-term hospitalization in SNCUs. Feeding Intolerance (FI), defined as the inability to digest enteral feedings associated to increase gastric residuals abdominal distension and/or emesis, is frequently encountered in the preterm infant and often leads to a disruption of the feeding plan. In most cases feeding intolerance represents a benign condition related to the immaturity of gastrointestinal function. As a consequence, individual interpretation of signs of feeding intolerance represents one of the most uncontrollable variables in the early nutritional management of these infants, and may lead to sub-optimal nutrition, delayed attainment of full enteral feeding gain and poor weight and prolonged intravenous nutrition supply.

It has been estimated that 5%-19% of premature infants admitted to Special Newborn Care Unit (SNCUs) develop feeding intolerance at some point during their length of stay. Preterm neonates have immature gastrointestinal motility, which manifests as gastro-oesophageal reflux, delayed gastric emptying and delay in intestinal transit. These results in frequent occurrence of feed intolerance, which 2 usually manifest as vomiting and or abdominal distension. Intolerance to oral feeding results in prolonged parenteral fluid therapy, increased hospital stay, increased risk of sepsis and consequently increased cost of treatment. To facilitate gastrointestinal transit, various prokinetic drugs have been used like erythromycin (intravenous/oral), cisapride, glycerin enema, amido trizoic acid enemas, and pantothenic acid.

These drugs may enhance contractile force and accelerate luminal transit time. Abdominal massage also tried. In our study we are going to evaluate the effectiveness of thyroxine in feeding intolerance. The thyroid and gut are intimately connected. Every aspect of GI function from saliva production, acid and enzyme production, bowel motility and bowel integrity can be impacted by alterations in cellular thyroid physiology. Reduced thyroid physiology in cells can lead to dysfunction in the gastrointestinal tract by reducing stomach acid, bile flow, pancreatic enzymes, bowel motility, 3 inflammations and increasing the probability of leaky gut syndrome [1].

Nearly every aspect of stomach function and gut physiology can be impaired by reduced cellular levels of thyroid hormone. Thyroid hormone as well as the thyroid gland itself plays a significant role in bowel motility. The thyroid gland produces motilin, a hormone, which stimulates the nerve and muscle complex that moves food through the GI tract. Impaired production often results in slowed motility or constipation, pain, bloating, gas, and other common GI symptoms. Preterm infants qualitatively have a similar TSH surge like term NBs, but it is blunted compared to them as a result of immaturity of the hypothalamic pituitary thyroid axis. TSH peaks to 40 mU/L at 30 minutes. The rise in T4 and T3 is also of a lesser magnitude. In preterm infants levels of serum T4 and T3 in the first days after birth vary directly with weeks of gestation [2].

Transient hypothyroidism is more common in preterm infants. Low T4, slightly elevated TSH is the features. Transient hypothyroxinemia of prematurity is due to hypothalamo pituitary thyroid axis immaturity as evidenced by limited neonatal TSH surge. Here there will be low T4, fT4 with normal or low TSH. Subclinical Hypothyroidism (SCH), defined by a normal total or free T4 level and a mildly elevated TSH (typically 5-10 mIU/L). Euthyroid sick syndrome is due to alternations in thyroid hormone that occur as an adaptive response to decreased basal metabolic rates in severely ill babies. Hence thyroid function test in preterm infants during illness will be confusing.

To evaluate the role of low dose thyroxine for subclinical hypothyroidism in preterm babies ≤ 34 weeks with feed intolerance.

Komiyamma et al. [3] in his study compared the preterm babies between those who were on thyroxine and those who were not and found that hypothyroidism is one the causative factor for abdominal distension that thyroxin supplementation was effective in improving the symptoms of abdominal distension and poor weight gain in VLBW infants. They concluded that improvement of intestinal tract function can lead to enhancement of nutritional state and may therefore aid in neurodevelopment in VLBW infants. Serum fT4 levels <1.3 ng/dl (mean 0.72 ng/dl). TSH values varied widely and were <8 μU/ml in 12 subjects [4].

Therefore, all subjects received thyroxin supplementation; after starting this, mean serum fT4 level increased significantly to 1.31 ng/dl. In parallel with fT4 increase, intestinal dilation improved in 16 out of 18 subjects (mean grade of dilation decreased from 2.8 to 1.6). Weight gain and quantity of tolerated milk were significantly increased with thyroxine supplementation in all and 17 of the 18. Kyung et al. in his study showed delayed elevation of thyrotropin on feeding intolerance in very low birth weight/preterm infants and found thyroxine supplementation was effective. In their study they investigated the effect of delayed elevation of Thyrotropin (deTSH) on gastrointestinal motility in Very Low Birth Weight Infants (VLBW). This study retrospectively investigated 228 premature VLBWI aged ≥ 4 weeks with normal neonatal TSH screening test results and free serum Thyroxine levels. Infants with serum TSH levels ranging from 5 to 10 μIU/mL were categorized as the deTSH group (n=76), when TSH was measured at 4 (n=53), 8 (n=20), or 12 (n=3) weeks of age [5].

: Standard deviation in the first group

: Standard deviation in the second group

: Mean difference between the samples

On calculation the sample size required: 24 in each group, 20% attrition expected, hence kept at thirty.

Preterm ≤ 34 weeks with signs and symptoms of feed intolerance, had ≥ 2 in: abdominal girth more than 2 cm of pre feed level, abdominal distension with more than 50% of fed residuals, persistent vomiting.

MENUVER: The preterm neonates included in the study were alternatively assigned into two arms group 1 and 2. Once the baby developed symptoms of feeding intolerance and after fulfilling the selection criteria, thyroid profile was done. If subclinical hypothyroidism present they entered the study after random selection. Group 1 received low dose thyroxine 5 microgram/kg along with the other treatment protocol followed while the Group 2 will be continued with the standard treatment protocol alone. After one week of treatment, the preterm that was not given thyroxine at the beginning will be given low dose thyroxine (if symptoms persist) and the effect on feeding intolerance symptoms watched. Total 14 days these preterm babies were monitored. Repeat TFT was done on 14th day of study in both groups and according to that next step was taken. Low dose thyroxine: group 1–5 microgram/kg/weight: standard treatment: group 2: baby was kept: Nil Per Oral (NPO), Nasogastric Tube (NGT) Intravenous Fluids (IVF), Antiemetic drops (Figure 1 and Table 1). 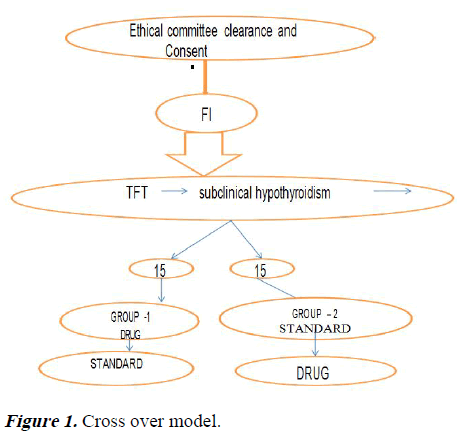 The results were entered in excel sheet, double checked and analysed using SPSS software (Statistical Package for the Social Sciences). Categorical variables were presented as frequency and percentages. Continuous variables were presented as mean ± standard deviation. Differences between and among categories were assessed with student’s t-tests and chi square test. P<0.05 was considered as statistically significant [9].

Base line comparability established between two groups in terms of sex, birth weight, gestational age, h/o PIH or pre eclampsia, h/o antenatal steroids, mode of delivery ND/LSCS. First min APGAR, RDS, day of onset of feed intolerance, compared between both groups. NIV/IPPV, apnea, NNEC, IVH, PDA, NNH compared both pre and post intervention in both groups. No statistical difference noted between these groups among the studied variables. Babies were observed for next 14 days of study period for feed intolerance, weight gain pattern and side effects of low dose thyroxine. The feeding volumes were noted as well as the time taken to reach the full enteral feeds (defined as 150 ml/kg per day). Weight gain pattern was observed by daily weight record on an electronic weighing scale with sensitivity of ± 1 g. Weight was noted daily for both groups (Table 2) [10]. 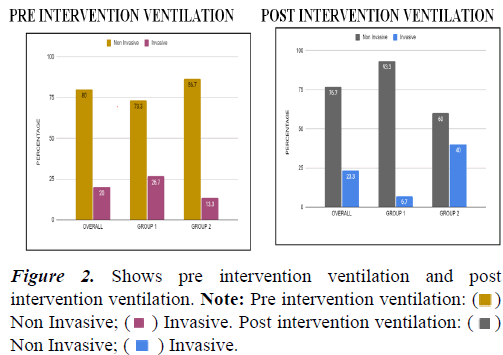 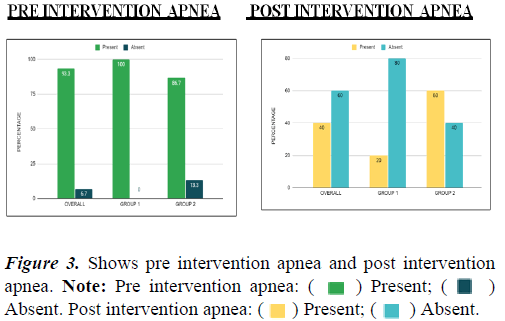 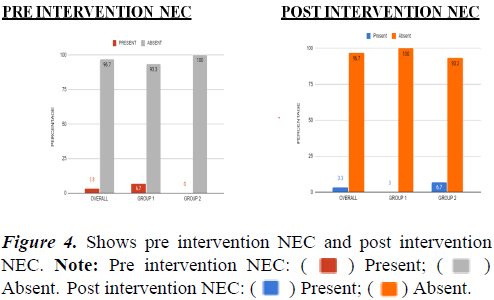 Table 3. Association within groups between pre and post intervention ventilation.

Table 4. There is a significant reduction in prevention or apnea before and after intervention. Apnea has reduced by 80% in group 1.

Table 5. Association within groups between pre and post intervention NEC. There is a no significant reduction in NEC within both groups before and after intervention.

Feeding intolerance is extremely common in premature infants. Therefore, it is important to know and assess correctly, the warning signs of the possible complications of enteral feeding. There was no statistically significant difference between groups in terms of gestational age, gender, birth weight, PIH/ preeclampsia, antenatal steroids, mode of delivery, APGAR, respiratory distress syndrome. Hence base line comparability is well established between groups. Mean weight gain increased significantly from 3.13 g/day to 20.7 g/day on day 7 and maintained same throughout the standard treatment period also in group I. Mean weight gain was significantly lower from 6.13 to 11.13 g/day on day 7 during standard treatment and after intervention the weight gain increased and reached 20.60 g/day on day 7 in group II [12].

Mean quantity of milk tolerated increased significantly from 5 ml/kg/day to 20 ml/kg day on day 5 of intervention and maintained throughout the standard treatment period also in group I. Mean quantity of milk tolerated 2 ml/kg/day to 12 ml/ kg/day on 7 of standard treatment but on starting the drug increased from 13 ml/kg/day to 20 ml/kg/day on day 6 of thyroxine [13]. There is a considerable improvement in pre intervention weight and post intervention weight within each group. But when the improvement at each stage is compared with the groups, there is a significant difference between both the groups at both pre intervention and post intervention period in milk intake and weight at all the times except for weight difference on day 7 [14]. This clearly indicates that even without thyroxine supplementation, there is increase in weight gain and milk intake. But the better catch up growth of the child is seen in children who are on thyroxine. Hence thyroxine supplementation helps in weight gain of the child appropriately [15].

There is a significant reduction in prevention of apnea before and after intervention. APNEA has reduced by 80% in group 1.

• Feeding intolerance in premature infants is one of the main causes of their long-term hospitalization in SNCUs.

• fT4 and TSH should be measured in preterm ≤ 34 we eks with feeding intolerance.

• Thyroxin supplementation is effective in improving the symptoms of abdominal distension and poor weight gain in preterm infants.

• Improvement of intestinal tract function can lead to enhancement of nutritional state and may therefore aid in neurodevelopmental outcome in premature infants.

Feeding Intolerance (FI), defined as the inability to digest enteral feedings associated to increase gastric residuals abdominal distension and/or emesis, is frequently encountered in the preterm infant and often leads to a disruption of the feeding plan.

• Feeding intolerance in premature infants is one of the main causes of their long-term hospitalization in SNCUs.

• This study was done to evaluate the role of thyroxine in preterm babies with feeding tolerance.

What is already known?

• Thyroxine supplementation is useful in Preterm NB with Hypothyroidism.

What this study adds?

• Thyroxine Supplementation is useful in Preterm with feed intolerance.

We recommend that thyroid function should be measured in all preterm infants with feeding intolerance. If serum fT4 and TSH levels are suggestive of subclinical hypothyroidsm, thyroxine supplementation should be considered as one of the way to improve these symptoms in preterm infants.