Adrenocortical tumors (ACT) are rare in childhood, which could be seen at any age [1]. First case of childhood ACT was reported in 1865 [2]. Although ACT is a rare neoplasm, its account for about 0.2% of all tumors affecting children and approximately 6% of all adrenal tumor seen in pediatric group [3]. The annual incidence of ACT in children under 15 years of age is an extremely rare ranging from 0.3-0.5 cases per million [4]. However, incidence are variable across various geographical regions, for example in the United States and Europe its accounts about 0.3-0.38 cases per million [4,5]. In comparison to a higher incidences in Brazil of 10-15 times more cases diagnosed than were in worldwide [6,7]. Syndromes reported with ACT were seen in almost 50% of the cases included two main syndromes, Li-Fraumeni syndrome resulted from alterations of the tumor suppressor gene p53 in chromosome 17 and Beckwith-Weidman syndrome from the effect of the region located in 11p15 [2,8,9]. ACT are categorized as either functional (hormone-secreting) which is most commonly seen in children and adolescents or nonfunctional (silent) tumor which is usually found in adults with symptoms of abdominal discomfort or back pain caused by the large mass effect of the tumor [10,11]. They could be benign or malignant tumors [3]. The most common clinical presentation of ACT in children is pseudo-precocious puberty seen in approximately 50-84.2% of cases or as Cushing’s syndrome in other remaining cases [12,13]. Malignancy should not be underestimated in this age group [2]. We report A 4- year-old boy who has presented with pseudoprecocious puberty caused by ACT as a rare cause in children.

A 4-year-old boy brought to the pediatric endocrinology clinic because of the appearance of pubic hair in conjunction with increase in penile length for the last 2 months. He is a product of full term, vaginal delivery, with uneventful past medical or surgical histories. No family history of endocrine tumors or early puberty. Systemic examinations including vital signs were unremarkable. He had facial acne all over his forehead and cheeks (Figure 1), with no skin hyperpigmentation. 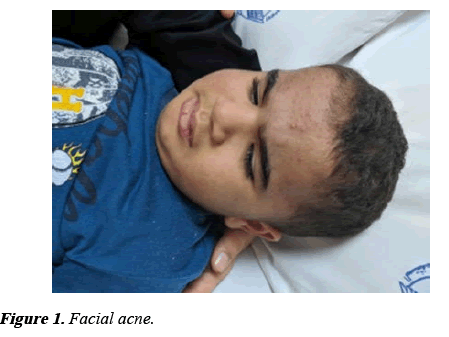 His Tanner staging of both pubic hair and genitalia was stage III. Volume of both testes were of 2 ml and his stretched penile length (SPL) was 7.5 cm (Figure 2). His serum hormonal assays were presented in Table 1, with low basal levels of Follicle-stimulating hormone (FSH), luteinizing hormone (LH) and 17- hydroxyprogesterone, while an elevated levels of testosterone and Dehydroepiandrosterone sulfate (DHEA-S) were revealed. Gonadotropin releasing hormone “ GNRH ” stimulation test showed negative response. Bone age assessment was advanced by 3 years. All of which confirms the diagnosis of pseudoprecocious puberty. Magnetic resonance imaging of the Abdomen revealed a right-sided retroperitoneal adrenal mass (Figure 3). Based on this clinical picture and imaging, the diagnosis of adrenocortical tumor was made. 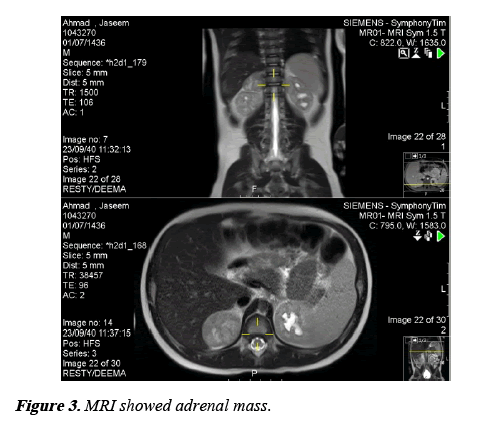 ACT could cause pseudoprecocious puberty by secretion of excess androgenic hormones leading to virilization, which is the most common presenting symptoms of the tumor in childhood; however, late presentation of ACT could be seen with CPP secondary to the maturation of hypothalamicpituitary- gonadal axis. Female children noticed to be more affected than males, with peak age of younger than 4 years [12]. Management of this disease is still challenging because of the limited numbers of reported cases.

Non classical congenital adrenal hyperplasia (NCAH) causes androgen over secretion which lead to pseudoprecocious puberty with the development of earlier signs of puberty, including pubic hair, acne and accelerating skeletal maturation [16], this disease could be detected early in the neonatal period by screening for an elevated serum level of 17- hydroxyprogesterone, however, in this case NCAH was excluded because of the normal levels of 17- hydroxyprogesterone, cortisol and adrenocorticotropic hormone (ACTH). Abdominal MRI finding of unilateral tumor of the right adrenal gland confirms the diagnosis of ACT.

Literature review of case reports revealed that virilization was considered as a good clue for suspecting diagnosis of ACT, similar to the presentation in this case [11,12,13]. Razavi reported a 10 month old boy diagnosed with ACT who presented with sexual pubic hair, acne and seborrhea dermatitis [3]. Another case of a 2 years old Indian boy was presented with pubic hair and penile enlargement [1]. Ghazizadeh reported virilization seen in 2 years old girl associated with ACT in 2013 [17]. However, discriminating benign tumor from malignant is not depending on hormonal secretions. A comprehensive evaluation of precocious puberty including clinical manifestation, laboratory testing and imaging is very important for reaching the final diagnosis.

Virilization of both sexes is an important manifestation of adrenocortical tumors which should be considered as one of the rare causes of Pseudoprecocious puberty. High index of suspicion and increase awareness of pediatricians has important role in early diagnosis and treatment.