Is the relation between the pulmonary artery sling and left atrium thrombosis genetic or mechanical cause? – A case report

Many cases with congenital heart disease are presented by intracardiac thrombosis. Most common site of is the right atrium. Insertion of a venous catheter in the inferior vena cava is one of the risk factor for thrombus in the right atrium. There are many causes that affect the occurrence of intracardiac thrombosis. There are genetic, mechanical or infectious causes. The association between the abnormal development of blood vessel and the thrombus formation was studied. In this article, the prothrombin G20210A mutation is responsible for thrombus.

A male baby about 36 weeks was delivered by caesarean section. The weight at birth was 2.1 kg and Apgar score was 9/10. The baby was admitted to the nursery intensive care unit due to prematurity. Antibiotic and surfactant were taken. After seven days antibiotics stopped and the patient discharged home in good condition. However, two weeks after discharge the baby develop vomiting and fever. There was a new murmur that was not heard on routine cardiac examination. The echocardiography was done for the first time. There was a surprise. There is a large mass in the right atrium. The mass is mobile about 3 cm and protruded through the tricuspid valve to the left atrium through the patent foramen ovale. At that time, the study was limited as the patient general condition was not good. The priority was to life saving of the patient and stabilization the general condition.

The patient was admitted to the nursery. After full investigation, the diagnosis of fungemia was detected and treated appropriately. The decision was taken to follow up the patient by echocardiography three times per week. On the second echocardiography, sedation was used and another surprise was noticed. There was pulmonary artery sling (PA sling) which was confirmed by multidetected computed tomography (MDCT) in Figures 1 and 2. Also, patent ductus arteriosus (PDA) was detected. The PDA was moderate size about 2 mm. The size of PDA was decreasing. Furthermore, the mass decreased in size after course of heparin infusion. The international normalizing ratio within normal. At the age of completed 37 weeks. The decision to surgical resection of the mass and PDA ligation was taken. The MDCT has a great role for diagnosis most CHD [8-10]. In Figure 3 a large PDA was seen at high level that normally left pulmonary artery easily seen at this plane of view. However, left pulmonary artery arise from the right pulmonary artery. 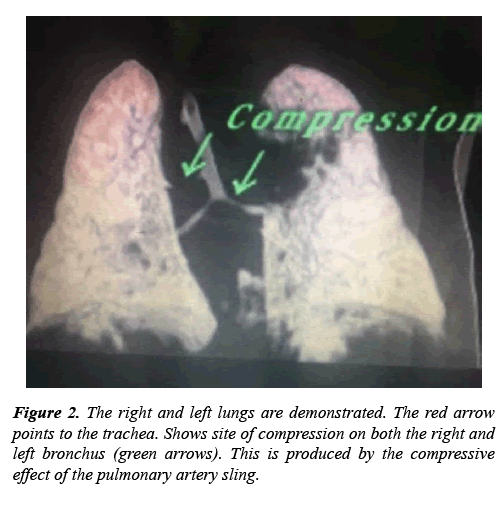 Figure 2. The right and left lungs are demonstrated. The red arrow points to the trachea. Shows site of compression on both the right and left bronchus (green arrows). This is produced by the compressive effect of the pulmonary artery sling. 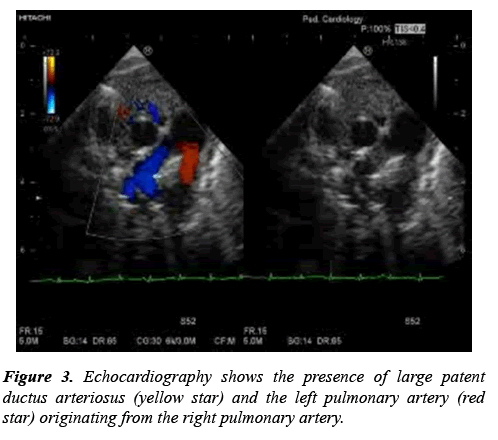 The association between the PA sling and the thrombus should be investigated. Full investigation was done to exclude all causes of thrombosis and no cause was detected. The last step was studying of the genes that result in thrombus formation. The mutation to prothrombin G20210A was detected. This mutation is an inherited condition and detectable in patients with thrombosis [7]. Is there any association between the abnormally developed left pulmonary artery and the thrombus, many question arise the possibility of abnormal vascular development either in the distribution of the branchial plexus and the abnormal nature of the hemostatic factors, still more investigation is needed. Therefore, the possibility of association abnormal vascular development in association with thrombus formation is a matter of thinking.

In the developing embryo, the normal pulmonary arteries are a composite of arterial buds from the developing ventral 6th aortic arch and capillaries that arise from the pulmonary postbranchial plexus surrounding the lung bud [11].

The PA sling arises, when the left lung bud fails to connect with the left 6th arch and, instead, forms an anastomosis to the right 6th arch via postbranchial channels between the trachea and the esophagus. This is a rare defect, and frequency is not determined. Associated tracheobronchial abnormalities may occur, especially complete tracheal rings and tracheomalacia. Hypoplasia and stenosis of tracheal segments occur and can potentiate the airway obstruction [12]. Congenital heart defects are found in 50% of pulmonary artery sling cases, most commonly atrial septal defect and ventricular septal defect Other organ system abnormalities may occur. These include imperforate anus, Hirschsprung disease and biliary atresia.

The possibility of genetic cause is under studying. There is association between the thrombus and abnormal vascular development. The gene mutation to prothrombin G20210A was detected [7]. This may be the cause for this association. The thrombus in the heart should be differentiated between other causes of intracardiac mass. One of the important causes is myxoma [13-15]. However, the atrial myxoma is fixed size even with use anticoagulant. The thrombus is decreased in size. Once the ICT is detected, cerebral thrombus should be excluded.