Subcutaneous Fat Necrosis (SCFN) is a benign and often self-limiting inflammatory disorder experienced by newborns that were exposed to perinatal stress in either form of asphyxia, hypothermia, cord prolapse, and/or sepsis. Lesions are usually benign and completely resolve within a duration ranging between a few weeks up to 6 months. They can be accompanied by multiple systemic complications, of which the most significant and of life-threatening potential is neonatal hypercalcaemia. If not timely anticipated and adequately treated, the patient might deteriorate due to dehydration and acute renal failure. Symptoms of neonatal hypercalcaemia can be variable in this age group, transcending from a nonspecific presentation of irritability, poor feeding, vomiting and constipation to the well recognised polyuria, polydipsia, and dehydration. Therapeutic options are provided through initial hyperhydration and calcium wasting diuretics, switching feeds to a low calcium and vitamin D formula milk, institution of systemic steroids and if necessary, initiating bisphosphonate therapy in hypercalcaemia that is severe and recalcitrant to the previously mentioned treatment modalities, and/or when a rapid decrease in serum calcium levels is desired. In this report we describe a case of a 10 month old female infant with moderate neonatal hypercalcaemia as a complication of extensive SCFN manifesting by the age of 10 days and persisting into a pro-longed clinical course of 9 months until most of the lesions were resolved.

Subcutaneous fat necrosis (SCFN) is a systemic inflammatory disorder of the subcutaneous adipose tissue and a rare form of panniculitis. It often manifests in full term or post term newborns, and rarely in those born at a gestational age earlier than 37 weeks. Those at a higher risk of developing this condition are newborns with history of exposure to perinatal stress in either form of cord prolapse, hypothermia, asphyxia, meconium aspiration, and/or sepsis [1]. Prenatal history may reveal the presence of maternal diabetes, hypertension, preeclampsia, hypothyroidism, and/or placental abruption, rendering this particular population of mothers more susceptible to delivering newborns with SCFN [2]. The underlying pathophysiology is hypothesised to be secondary to a combination of local tissue hypoxia, mechanical pressure, and crystallisation of fatty tissue when exposed to hypothermia due to the high content of stearic acids and saturated palmitic acids in neonatal adipose tissue [3]. Although variable in duration, complete resolution of the lesions is expected from a couple of weeks to a reported maximum of 6 months [4]. SCFN may be complicated by serious metabolic dysfunction, such as hypercalcaemia, occurring at a prevalence of 36-56% of reported cases, which can be potentially life-threatening due to the possibility of acute renal failure onset if not timely and correctly addressed [5].

Presentation is usually within the first 6 weeks of life with violaceous nodules and erythematous plaques typically covering the skin of the posterior trunk and proximal limbs; with the chest and abdomen more frequently spared [6]. Patients are usually irritable with persistent crying as the lesions are often swollen, inflamed and frequently tender to touch. When complicated by hypercalcaemia; polyuria, polydipsia, constipation, abdominal pain, nausea and vomiting all add to the discomfort and irritability experienced by the infant leading to poor feeding, dehydration and weight loss [7]. In this report we describe a case of a 10 month old female with moderate neonatal hypercalcaemia as a complication of extensive SCFN manifesting by the age of 10 days, and persisting for a prolonged clinical course of 9 months until most of the lesions were resolved.

A 10 month old female was brought into medical attention at the age of 10 days with the complaint of multiple areas of purplish discolouration overlying an erythematous swollen base that is spreading extensively over her posterior trunk, proximal upper and proximal lower limbs. With a birth weight of 2.9 kg, she was a product of a full term pregnancy that was unremarkable for any gestational disease, and was delivered spontaneously through normal vaginal delivery to a healthy mother. However, the postnatal period was complicated by hy-pothermia and perinatal asphyxia secondary to meconium aspiration. Her clinical presentation began when she was 10 days old and was associated with decreased oral intake, irritability and vomiting. Neither history of convulsions or loss of consciousness were present, nor the remaining review of her other systems remarkable for any abnormalities.

On examination, she was vitally stable, with multiple purple-red nodules noted bilaterally on the lateral and posterior aspects of the upper limbs, and extending through her back towards the sacrum with involvement of the proximal thighs (Figure 1). On palpation, the lesions were hot and tender to touch. The clinical picture was therefore consistent with subcutaneous fat necrosis. Her metabolic profile revealed hypercalcaemia with secondary hypoparathyroidism (Table 1). A renal ultrasound was ordered to evaluate the renal integrity and showed no presence of hydronephrosis or parenchymal calcifications. Additional brain ultrasound came back within normal as well. 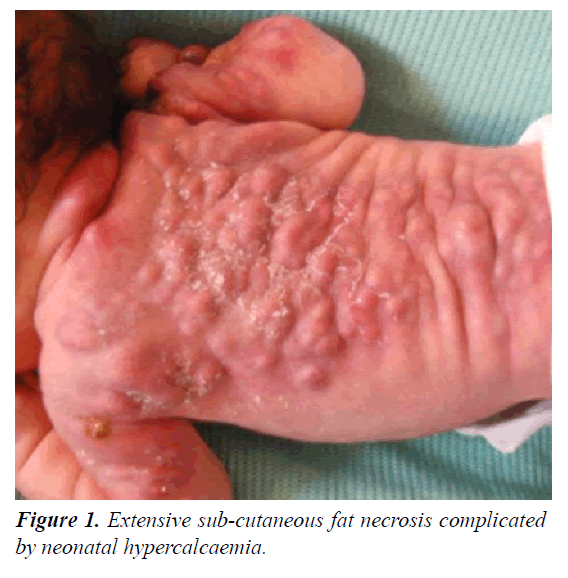 Initial protocol for the management of hypercalcaemia was instituted, with priority first allocated towards adequate patient hydration. Intravenous diuretics was initiated to elicit forced calcium diuresis but to no significant clinical or biochemical improvement. Consequently, oral prednisolone was started at an initial dose of 2 mg/kg daily as indicated to treat both the clinical lesions as well as the hypercalcaemia. After two weeks, serum calcium levels were normalised, and the steroid doses were gradually tapered but continued to be provided on alternate days until the skin lesions resolved, which took about 9 months in total.

Newborns affected with SCFN are considered to have developed the systemic complication of hypercalcaemia when their serum calcium levels exceed 3 mmol/L. This is thought to be mediated through various proposed mechanisms that include osteoclast over activation stimulated by elevated levels of prostaglandin E, increasing the rate of born turn over, overproduction of activated vitamin D by circulating inflammatory macrophages leading to the increase in both intestinal absorption and renal reabsorption of calcium, and possible calcium release from the necrotic adipose tissue [8].

The prognosis of SCFN is relatively benign, spontaneously resolving in most cases with no residual sequalae. Rarely do lesions progress to ulceration and evolution of liquid filled bullae that might require additional local skin care [9]. Metabolic complications include thrombocytopaenia, hypertriglyceridaemia, hypoglycaemia, and hypercalcaemia; the latter being of the most serious consequence. Anticipation of hypercalcaemia in children affected with SCFN should be approached with mandatory screening of affected cases. This is be-cause it can present as a biochemical finding with nonspecific lethargy, irritability, and persistent crying or run a more symptomatic course of hypotonia, constipation, polydipsia, polyuria, and a short period of retained haemodynamic stability before deteriorating into severe dehydration and acute renal failure. Some of the common differential diagnosis of SCFN to consider in the clinical approach include cold panniculitis, scleroderma, and sclerema neonatorum; all of which were first ruled out in this case.

Initial approach to hypercalcaemia consists of prompt hydration in order to prevent dehydration and thereby acute renal injury, analgesia for the pain, institution of calcium wasting diuretics with the added benefit of preventing fluid overload, and changing feeds to a low calcium and vitamin D formula milk [3,10]. If the aforementioned measures fail, prednisone is recommended as second line therapy for treating both the skin lesions and the hypercalcaemia accompanying SCFN. Aside from the anti-inflammatory properties of glucocorticoids, they also interfere with Vitamin D metabolism through inhibiting the activation of 25 hydroxycholecalciferol by circulating inflammatory macrophages. This avoids calcium build up and subsequent calcifications of the renal parenchyma leading to nephrocalcinosis and/or nephrolithiasis as well as other internal organ calcifications [11].

This is precisely described by one case report of a female neonate who had developed internal organ calcifications following the dermatological manifestations of subcutaneous fat necrosis that was complicated by biochemical thrombocytopaenia and hypercalcaemia at 3 days of age [8]. Another case report outlined the development of SCFN complicated by both hypercalcaemia and hypoglycaemia on the 11th day of life of a full term neonate following exposure to neonatal asphyxia at birth, with normalisation of serum calcium being spontaneous and within the duration of approximately one month [12]. In contrast to our patient, no further metabolic or biochemical complications of SCFN were observed aside from the hypercalcaemia. However, it did require treatment and both skin lesions and hypercalcaemia did not resolve neither spontaneously nor within the short span of a month, possibly because the patient described in our report had exhibited clinically more extensive lesions covering a larger surface area and demonstrating a slower path of regression.

In theory, the clinical lesions of SCFN usually regress within weeks of instituting therapy but may take up to 6 months to completely resolve, leaving no scarring sequelae behind [4]. Although no local dermatological complication was experienced by our patient, her symptoms only approached complete resolution around 9 months of age, despite the early institution and continued therapy with prednisone. Her steroid dosing was gradually tapered after the calcium level was restored to reference range but was continued on alternate days until the lesions regressed to a satisfactory degree. This was the preferred approach due to the rationale that the hypercalcaemia was more likely to recur if treatment was stopped as her lesions were grossly extensive, covering a significant surface area, slowly regressing, and therefore could have continued to release calcium ions into the circulation from the persistent necrotic adipose tissue. Additionally, the added anti-inflammatory benefit of steroids would contribute to the resolution of the skin lesions. It is noteworthy to mention that despite the prolonged course of steroids that this patient was exposed to, with proper dosing and regular follow up, we were able to avoid the development of any of the complications associated with prolonged systemic steroid therapy, such as cushings syndrome, hyperglycaemia, osteoporosis, etc.

Although hypercalcaemia was simultaneously discovered alongside the presentation of skin lesions in this case, it is more often that a later-onset hypercalcaemia is diagnosed weeks after the lesions are first apprehended. This was the case in one report where the infant developed a severe hypercalcaemia reaching a concentration of 4.15 mmol/L two weeks after the development of the skin lesions, and had required the administration of pamidronate, a systemic bisphosphonate, in order to effectively and rapidly lower serum calcium levels [13]. Bisphosphonates work to lower serum calcium concentration through directly inhibiting the activity of osteoclasts and preventing the dissolution of hydroxyapatite crystals containing calcium phosphate. Fortunately, this resort was unnecessary in our case as the patient had a moderate hypercalcaemia of 3.2 mmol/L and was responsive to prednisone with serum calcium levels normalizing within 2 weeks from presentation.

In conclusion, although SCFN is a benign, sometimes self-limiting condition, it still should be recognised as a possible complication in newborns and infants exposed to perinatal stress, particularly birth asphyxia. Furthermore, routine screening for hypercalcaemia is recommended as SCFN is a predisposing factor to the more serious development of neonatal hypercalcaemia, which could be life threatening. Due to the possibility of either delayed presentation or recurrence, we recommend that serial monitoring of serum calcium be continued for a minimum of 6 months after the onset of skin lesions that are characteristic of SCFN, particularly if the dermatological manifestation persists. Furthermore, we recommend continued therapy for as long as the lesions are clinically persistent to avoid the possibility of hypercalcaemia relapse.