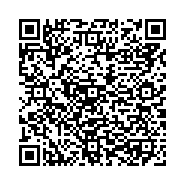 Efficacy and safety of hydroxyurea in children with E-beta thalassemia.

Objectives: The present study was aimed to assess the efficacy and safety of hydroxyurea in reducing transfusion requirement in children with E-beta thalassemia, with monitoring of growth parameters. Methods: It was a prospective cohort study done in children with E-beta thalassemia, both Transfusions-Dependent (TDT) and Non-Transfusion-Dependent (NTDT), aged between 5-12 years. All children were treated with hydroxyurea with a dose of 10 mg/kg per day for 12 months, and followed up thereafter for at least 1 year.

Results and Conclusion: A total of 63 children were enrolled in the study. Hydroxyurea causes significant increment of baseline hemoglobin, both in TDT and NTDT. Transfusion requirement was significantly reduced in both the subgroups. There was no impairment of growth parameters during the study. Adverse effects were minimal and self-limiting. Hence the study concludes that, hydroxyurea is an effective and safe drug in children with E-beta thalassemia.

Thalassemia syndromes are commonest single gene disorders in the world [1]. Within it, E-beta thalassemia is a common hemolytic anemia especially found in Southeast Asia including India [2]. It can present a varied range of clinical manifestations, both as Transfusion Dependent (TDT) and Non-Transfusion Dependent (NTDT) phenotypes. Whereas blood transfusion is the mainstay of care for patients with thalassemia, however, it comes with the risk of blood-borne infections, iron overload, and adverse reactions that could become a major source of morbidity and mortality.

Though Hu has shown its efficacy in reducing transfusion requirements in adults with E-beta thalassemia it can also be associated with several serious adverse effects. Often it was seen that children had reduced transfusion requirements, at the cost of stunting growth. Studies evaluating the effect of Hu therapy in the pediatric age group and is scarce. Hence this study was done to evaluate the safety and efficacy of Hu in the treatment of patients of E-β Thalassemia with special emphasis on monitoring growth parameters.

• To assess the efficacy of hydroxyurea in reducing transfusion requirement in patients of E-beta thalassemia, with monitoring of growth parameters.

• To assess the safety of hydroxyurea in patients with E-beta thalassemia.

It was a prospective cohort study done in a tertiary care hospital, in Kolkata. Patients with E-beta thalassemia, aged between 5-12 years, who attended either the inpatient or outpatient department of the hospital, were included in this study. Children should have available adequate medical records supplemented with history from reliable sources. Children who were having any other causes of anemia: cardiac, pulmonary, hepatic, or renal dysfunction; hepatitis B, C, or HIV seropositivity were excluded from the study. All procedures performed in studies involving human participants were following the ethical standards of the institutional and/or national research committee and with the 1964 Helsinki declaration and its later amendments or comparable ethical standards. This study was registered under memo no. MC/KOL/IEC/242/1-2019 at the institutional research ethics board. The study began after taking written informed consent from the guardian/parents and assent from the patient.

After taking detailed history including clinical-epidemiological information, and treatment records including blood transfusion-related history, clinical examinations were done to assess the growth parameters (height and weight) according to WHO criteria, the status of hepato-splenomegaly, and other relevant findings. After filling out the detailed medical proforma, children were classified as Transfusion Dependent (TDT) or Non-Transfusion Dependent Thalassemia (NTDT), based on available information.

TDT: Children who required lifelong regular red blood cell transfusions for survival. For the study, it was defined as more than 6 transfusions in the last 6 months [5].

NTDT: Children who didn’t require lifelong regular transfusions for survival. For the study, it was defined as less than 6 transfusions in the last 6 months [5].

All children were treated with hydroxyurea (Hu) with a dose of 10 mg/kg per day, at least for 12 months. If there is leukopenia (WBC<2000/cmm), the dose of Hu was reduced by 2 mg/kg every week. They were allowed to take blood transfusions as per the standard treatment protocol of TDT and NTDT [6,7]. Data were collected regarding transfusion requirement, growth parameters, complete blood count, and biochemical parameters. HPLC was done every 3 months. Initially, they were followed up every fortnightly for 3 months, followed by a monthly interval during the rest of the study period.

The primary endpoints defined for this study were the decrement of transfusion requirement and increase of hemoglobin level from baseline after treatment with Hu, with no added adverse effect. Secondary endpoints are defined as adequate gain in height and Wt and rise in HbF. Adverse events were evaluated according to Common Terminology Criteria for Adverse Events (CTCAE) version 5.0 published by US National Cancer Institute (NCI)[8,9].

Patients were enrolled in this study from February 2019 to January 2020. All the children were followed up to December 2020, i.e. minimal of 1 year. Data were analyzed using statistical methods (mean, standard deviation) and software.

Table 1. Comparison of Hb during the study.

There was more rise of Hb in NTDT (5.77 to 7.45 gm/dl) from baseline in comparison to TDT (5.10 to 6.12 gm/dl). The pvalue was statistically significant when the two groups were compared (Table 2 and Figure 1). The children with TDT have a mean blood requirement of 153.2 ml/kg/year before initiation of treatment. After one year of treatment, it was reduced to 120 ml/kg/year. It was found to be statistically significant between pre and during-treatment blood requirement and the p-value was 0.012.

Table 2. Comparison of Hb (gm/dl) between TDT and NTDT. 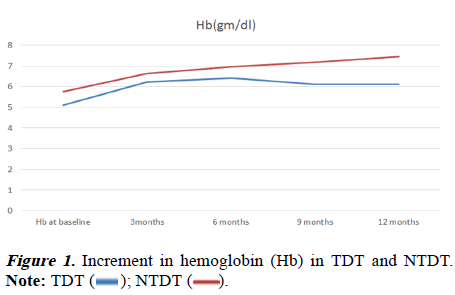 In the NTDT children, before initiation of therapy mean blood requirement was 52.34 ml/kg/year and after one year of treatment, it was reduced to 17.09 ml/kg/year. It was also found to be statistically significant and the p-value was 0.00 (Table 3 and Figure 2).

Table 3. Comparison between pretreatment and during treatment blood requirement (ml/kg/yr). 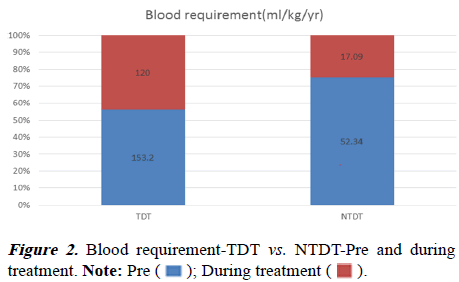 Figure 2:Blood requirement-TDT vs. NTDT-Pre and during treatment.
Note: Pre (

Table 4. Growth parameters during the study. 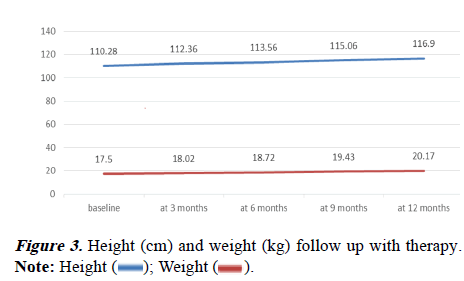 There was also a minimal increment in liver and spleen size during the study period. This concludes that the growth of the children was normal, during the study. Follow-up HPLC showed a progressive increase in Hb F over the months. At 12 months of the study, the mean value of HbF was 42.98 ± 6.99 (Table 5 and Figure 4). Transient leukopenia was seen in 2 patients within 2 weeks of therapy and it was reversible with a reduction of drug dosage. Subsequently, they tolerated the drug very well. No other adverse effects were seen during the study period. 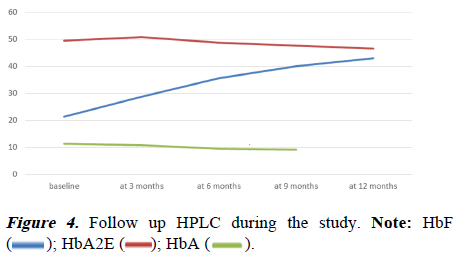 Figure 4:Follow up HPLC during the study.
Note: HbF (

In children with E-beta thalassemia, during treatment with Hu, both TDT and NTDT showed a persistent rise of hemoglobin at different points in time, as described in this study. However, there was more rise of mean Hb from baseline in NTDT compared to TDT, which was statistically significant (pvalue< 0.05). This was a unique finding in this study.

Regular blood transfusion is a major obstacle in the life of children with thalassemia. Hydroxyurea significantly reduced the transfusion requirement both in TDT and NTDT as described in this study. All the children tolerated the drug well. Transient leucopenia was observed in only two children, who were also able to continue the medicine at a reduced dosage.

Often, the growth was jeopardized and hepato-splenomegaly was augmented when the transfusion is denied in thalassemic. This was not seen in this study. All the children, while on Hu therapy, both TDT and NTDT, showed gradually increasing Wt at different periods. Mean height increments over time during treatment were found to be statistically significant (pvalue< 0.05). There was no significant height increment difference between TDT and NTDT.

There was a decrement in the size of the liver and spleen during the study period. Hence the study concludes that, in children with E-beta thalassemia, treated with hydroxyurea, there was a reduction in transfusion requirement and an increase in baseline hemoglobin. Hydroxyurea reduces transfusion requirement and increases baseline hemoglobin in children with E-beta thalassemia, both transfusion dependent and non-transfusion dependent, without hampering growth parameters with no added adverse effect.