Hair is a distinctive character of mammals and has various functions. There are approximately 100,000 to 150,000 hair follicles found in the human scalp. Skin produces hair all over the body with the exception of the sole of the foot, palm of the hand, buccal surface of the lip, and parts of the external genitalia. We report the case of a 4-month-old Saudi girl brought to our pediatric endocrinology service because of generalized hypertrichosis. She was noted to have dysmorphic features and underwent laboratory investigations with magnetic resonance imaging (MRI) of the lumbosacral spine. On the basis of these findings, Cornelia de Lange syndrome was diagnosed and genetic counselling was provided to the family.

Hair is a distinctive character of mammals and has various functions. There are approximately 100,000 to 150,000 hair follicles found in the human scalp. In humans it is a special and defended feature, especially in females, but its main functions are in protection of the skin from mechanical injuries and to facilitate homeothermy [1,2].

Skin produces hair all over the body with the exception of the sole of the foot, palm of the hand, buccal surface of the lip, and parts of the external genitalia; moreover, human hair growth is reduced with tiny and virtually colorless hair on most of the body surface, whereas hair is longer, thicker, and heavily pigmented in other areas, such as the scalp, eyelashes, and eyebrows [3]. Here we report a case of a 4-month-old female infant presenting with generalized hypertrichosis over the whole body and found to have multiple congenital anomalies. On further investigation she was diagnosed with Cornelia de lange syndrome.

A 4-month-old Saudi girl with a known case of Tetralogy of Fallot and pulmonary atresia was brought to our pediatric endocrinology service because of generalized hypertrichosis. She was a product of full term, delivered by spontaneous vaginal delivery after an uneventful pregnancy, with no birth complications. She had a weight of 2.5 kg at birth. Family history was positive for consanguinity and her other siblings were normal. She has dysmorphic features, including bushy eyebrows, synophrys, long curled eyelashes, anteverted nostrils, a thin upper lip, a long philtrum, micrognathia, short neck, overlapping of second and third toes bilaterally, syndactyly, prominent antihelix, and hypertrichosis. The hair was short (2 cm), thin, and often unpigmented. Additionally, she has sacral dimple. She underwent laboratory investigations as shown in Table 1. In addition, she underwent magnetic resonance imaging (MRI) of the lumbosacral spine, which showed closed posterior neural tube defect at the level of L5- S1 (Figure 1). 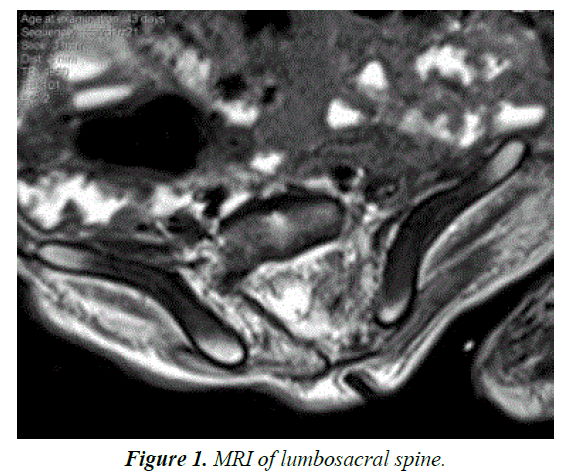 On the basis of these findings, Cornelia de Lange syndrome was diagnosed and genetic counselling was provided to the family.

Human body is covered by large number of hair follicles. The hair follicle type and size can be changed in response to many factors, specifically androgens [4]. Human hair can be categorised into three types: terminal, vellus, or intermediate. The body parts covered by hormonal dependent hair such as scalp, beard, chest, axilla, and pubic region consists of terminal hair which are characterised by long (2 cm), thick (60 mm in diameter), pigmented, and medullated [4,5]. Terminal hair usually extends more than 3 mm into the hypodermis. The rest of the body in adults is covered with vellus hair (androgen-independent hair, i.e., eyebrows and lashes), which is short (2 cm), thin (30 mm in diameter), often unpigmented, and extending just 1 mm into the dermis. Its primary role is to protect the skin and keep the body warm. It is associated with syndromic cases such as Cornelia de Lange Syndrome. Finally, some hair follicles are classified as intermediate hair, which can exist in a transitional phase between terminal and vellus forms.

One of the major classes of abnormal hair growth patterning is hypertrichosis, the term used for excessive hair growth in a nonsexual distribution which is an androgen excess. Moreover, hypertrichosis may be localized or generalized growth of vellus type hair and may be either acquired or congenital. This can present as an solitary finding or may be accompanying with other abnormalities. The underlying mechanism is not clear [5].

Such patients usually be cured after stopping the drugs within short period of time (weeks to months), Additionally, it can be linked to systemic diseases, as malnutrition, hypothyroidism, porphyria, tuberculosis, juvenile dermatomyositis [7].

Furthermore, many reports of hypertrichosis have been commonly mistaken as “Hirsutism” a term that should be reserved for the subclass of hypertrichosis caused by excess androgen-sensitive hair growth [1]. Diagnosis of hirsutism only can be done in women and children who is having an excessive hair growth that is distributed in an adult, male-pattern (i.e., face, chest, abdomen, lower back, upper arms and thighs). These cases must examined for further sings of hyperandrogenism [4].

In the present case, the pattern of hair overgrowth more closely matched the characteristic of hypertrichosis, with short, thin, unpigmented hair covering the whole body as seen in Figures 2-5. 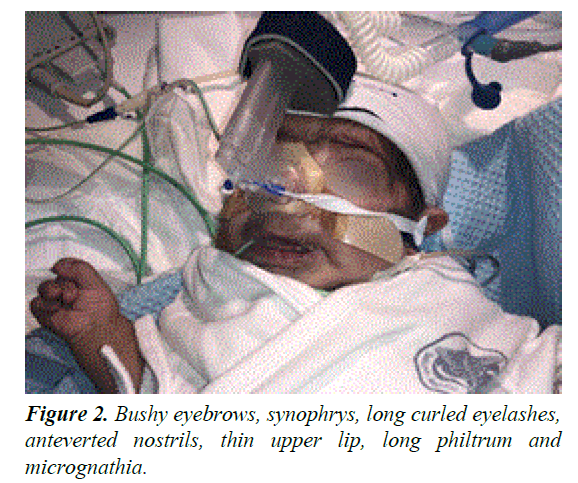 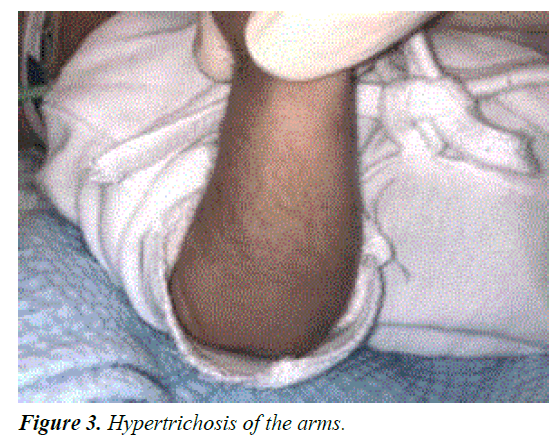 Figure 3. Hypertrichosis of the arms. 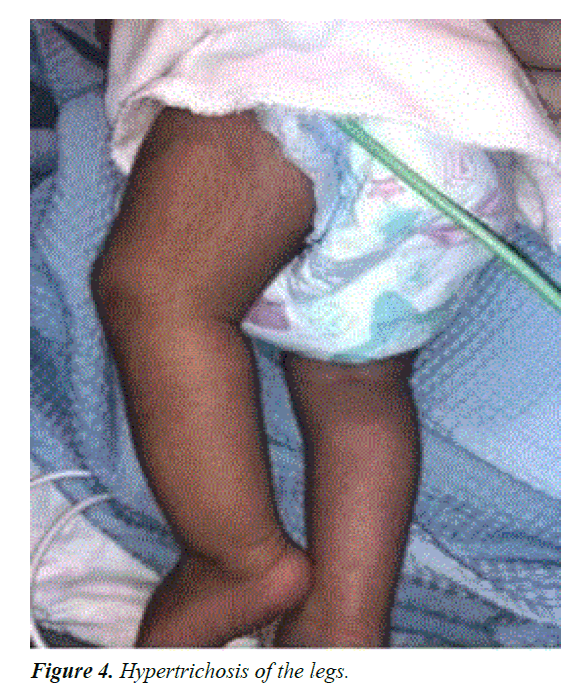 Figure 4. Hypertrichosis of the legs. 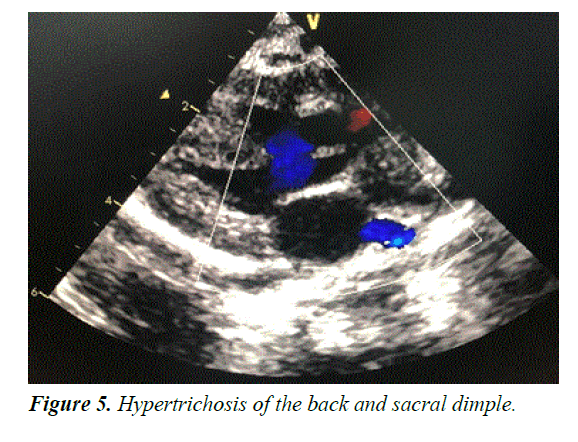 Figure 5. Hypertrichosis of the back and sacral dimple.

Cornelia de Lange syndrome (CdLS) is an uncommon multi system genetic disorder of unknown causation, characterized by many symptoms affecting the whole body such as cardiac, skeletal, gastrointestinal, visual and auditory systems, also include distinctive facial dysmorphism, and mental retardation and delayed growth and development, there is no reports about age, racial, or gender preference.

Majority of the cases are due to spontaneous mutations involving genes like NIPBL (Nipped B-like protein) on chromosome 5, SMC1A on the X chromosome, and SMC3 on chromosome 10, some reports suggested that there is a genetical transmission with an autosomal dominant pattern, but most cases are sporadic [8].

However most of the features of CdLS can be identified by before birth by ultrasound imaging or even at birth. Approximately, the incidence is one neonate born per 10,000 to 50,000 births and there is a 2-5% risk of recurrence in a subsequent pregnancy [9]. This case was the first case reported in Saudi Arabia. Dr. Brachmann reported the first ever case in 1916, though Dr. Cornelia de Lange, a Dutch pediatrician specified it as a distinct syndrome in 1933 after whom the disorder has been named [6].

She did not have any visual disorders, cleft palate, or macroglossia, but she did have overlapping of the second and third toes, bilateral syndactyly, prominent antihelix, a sacral dimple, short stature, and generalized hypertrichosis. The most common cardiac defects seen with CdLS are ventricular septal defects, such as the Tetralogy of Fallot and pulmonary atresia seen in this case.

CdLS diagnosis currently depends clinical observations. A detailed family history and clinical examination, laboratory tests as in Table 1, X-rays, and chromosomal analysis must be taken, that helps in confirming the clinical diagnosis [10].

Still a normal life expectancy for this cases, if there are no major cardiac or gastrointestinal malformations or complications such as apnea. Differential diagnosis such as Fryns syndrome and fetal alcohol syndrome should be excluded (Figures 6-9) [12]. 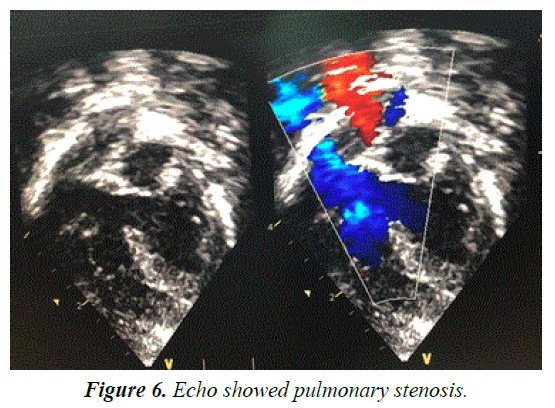 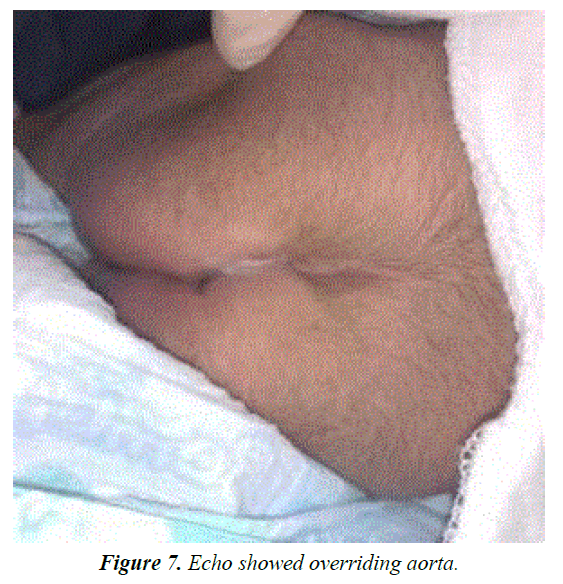 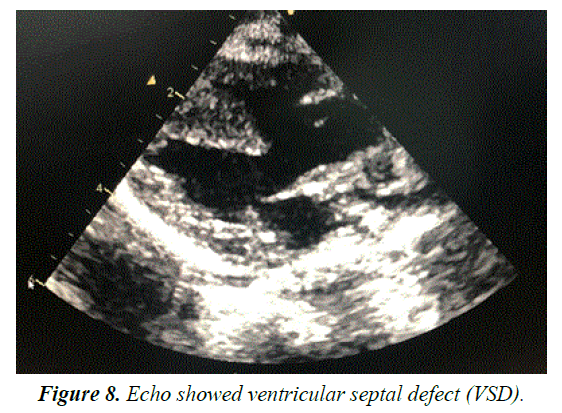 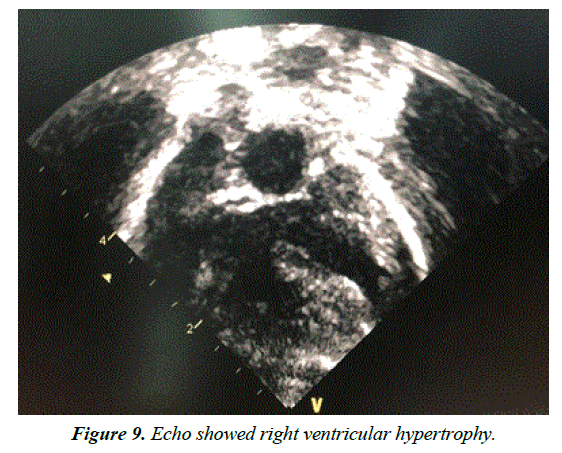