Introduction: Transient tachypnea of the newborn (TTN) also called wet lung, occurs due to delayed clearance of lung fluid. The diagnosis of TTN was primarily based on medical history, clinical manifestations, arterial blood gas analysis, and chest radiography (CXR). It is estimated that over 70% of infants with TTN are clinically misdiagnosed with Respiratory distress syndrome (RDS). Lung ultrasound (LUS) is an emerging technique that could be used for early detection of TTN. This study aims to evaluate the value of lung ultrasound in the diagnosis of TTN in late-preterm and full-term neonates.

Material and Methods: Sixty five late preterm and term neonates with signs of respiratory distress were included in this prospective observational study from January 2016 to June 2017. Lung ultrasound was done within the first 24 hours of birth and assessed according to the observation indices like A-line, B-line and Double lung point.

Results: On lung ultrasound, 53 (81.5%) neonates showed the feature of double lung point (DLP) while 41 (63.1%) neonates showed A-line. The respiratory symptoms subsided in 38 (58.4%) babies at room air while only 2 (3.1%) babies required continuous positive airway pressure ventilation. The DLP feature on LUS was significantly more in babies born to primi mothers than multigravida (p value 0.02) and those delivered through LSCS when compared to babies delivered vaginally (p value- 0.01).

Conclusion: TTN is a self-limiting condition and treatment is mainly supportive. The results of this study further demonstrate that LUS can accurately and reliably diagnose TTN. Therefore, significantly reducing the need for chest X-rays and ultimately result in lower exposure of a neonate to ionizing radiation. This will aid in counselling the parents regarding its benign nature and conservative management.

Transient tachypnea of the newborn (TTN), first described by Avery and coworkers in 1966. The investigators named the disorder “Transient Tachypnea of the Newborn”(TTN) and speculated that it was the result of delayed clearance of fetal lung liquid. Risk factors for development of TTN include premature or elective cesarean delivery without labor, large birth weight, maternal diabetes, maternal asthma, twin pregnancy, and male gender [4]. Respiratory morbidity is inversely related to gestational age.

With the onset of labor, the pulmonary epithelium changes from a chloride-secreting membrane to a sodium-absorbing membrane, with reversal of the direction of flow of lung liquid. This change is an active metabolic process involving increased Na+K+ATPase activity in the epithelial cells and serves to drive liquid from the lung lumen into the interstitium [5]. In addition, because lung liquid contains very little protein, oncotic pressure also favors the movement of water from the air space back into the interstitium, and from there into the vascular compartment [6-8]. The mechanical force of birth canal squeeze was originally thought to be the major factor in lung fluid resorption but is now believed to be only a minor contributor [4]. Birth itself was shown to be associated with a surge in fetal catecholamine secretion, which was critically linked to an increase in β-adrenergic-stimulated lung liquid clearance by increased expression of ENaC and Na-K-ATPase activity [9]. A delay or impairment in lung fluid absorption at birth potentially leads to filling of the lung airspaces with fluid and causes a ventilation/perfusion mismatch, which eventually can culminate in transient tachypnea of the newborn (TTN) or neonatal respiratory distress syndrome (RDS). The diagnosis of transient tachypnea of the newborn (TTN) is traditionally based on clinical manifestations, arterial blood gas analysis (ABG) and chest x-ray (CXR). The radiographic features may occasionally look similar to pulmonary edema, meconium aspiration syndrome or RDS [10]. However, the use of this imaging technique is limited due to transportation issues and inevitable radiation. Ultrasound has been emerging to be useful in the diagnosis of TTN as well as prediction of the need for respiratory support in infants affected by TTN [11,12].

The normal lung is “black”. In a normally aerated lung, the only detectable structure is the pleura, visualized as a hyperechoic horizontal line. The pleural line moves synchronously with respiration [13]. This dynamic horizontal movement is called lung sliding.

Pleural line: It is a smooth regular hyperechoiec sliding line below the rib line usually measuring <0.5mm in thickness. Lung sliding is the movement of the pleura synchronized with respiration in a to-and-fro pattern [14]. 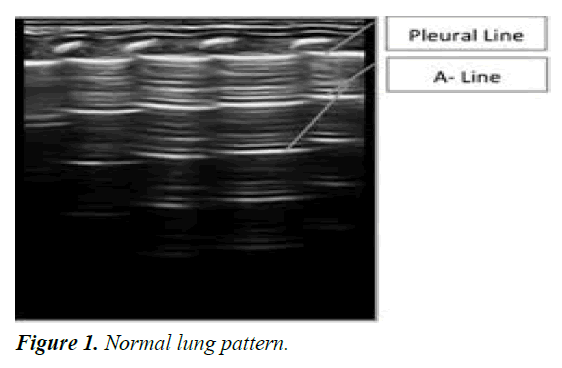 B line: B-lines are defined as discrete laser-like vertical hyperechoic reverberation artifacts that arise from the pleural line, extend to the bottom of the screen without fading, and move synchronously with lung sliding [16,17] their number increases along with decreasing air content and increase in lung density [18,19] (Figure 2). 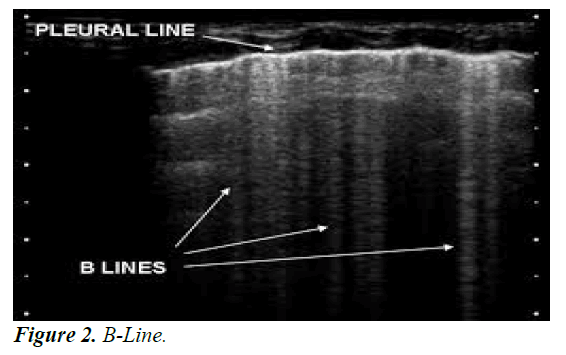 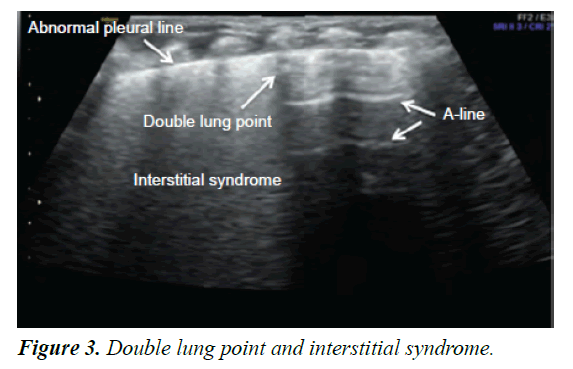 This is a descriptive study carried out on late preterm and term neonates in NICU, Department of Paediatrics, Kempegowda Institute of Medical Science, Bengaluru, Karnataka, India.

• Symptoms of respiratory distress defined as:

Method of collection of data-

• Prior to conducting this study, we received informed consent from the neonate’s parents and approval from the Ethics committee of our hospital.

• All study subjects were selected from late preterm and term neonates admitted in neonatal intensive care unit of Kempegowda Institute of Medical Sciences, Bangalore and lung ultrasound was done at the earliest (<24 hours of birth) at bedside . Sixty five neonates were selected in the 18 months duration from January 2016 to June 2017 on the basis of clinical presentation.

• GE Volusion 730 (GE Medical Systems, Milwaukee, USA) ultrasound instrument and a high definition linear array probe with a frequency of 11.0 MHz was used in this study.

• In a quiet state, the infants were placed in the supine, lateral, or prone position for the scan. Each lung was divided into 3 regions anterior, lateral, and posterior regions by the anterior and posterior axillary line.

• The ultrasound probe was placed perpendicular to the ribs. Each region of both lungs was carefully scanned and looked for the following observation indexes which include the normal pleural lines, A lines, Blines and double lung point (DLP).

In our study, among 65 cases, mean age distribution of study participants (in hours) at which LUS was done is 8.9 hours.

The gender distribution of the study participants was 45 (69.2%) male infants and 20 (30.8%) female infants. Among the 65 babies enrolled, 45 (69.2%) babies were delivered to primi mothers. In this study, term babies were 41 (63.1%) while late preterm babies were 24 (36.9%) and 43 (66.2%) babies were delivered through LSCS. Out of 65 neonates in the study, babies with birth weight of >2.5 kg constituted 50 (76.9%) as most of them were term babies whereas babies with birth weight of 1-2.49 kg was 15 (23.1%) as shown in Table 1. The most prominent clinical feature in the study was tachypnea with 58 (89.2%) neonates having a respiratory rate of >60 while nasal flaring and intercostal retractions was observed in 29 (44.6%) neonates each. The respiratory symptoms subsided in 38 (58.4%) babies at room air while only 2 (3.1%) babies required nasal CPAP. On lung ultrasound, 53 (81.5%) neonates showed the feature of double lung point (DLP) while 41 (63.1%) neonates showed A-line. These LUS findings was compared with the gestational age, obstetric score, mode of delivery, gender of the babies, birth weight and the clinical findings to look for any statistical significance. The DLP feature on LUS was significantly more in babies born to primi mothers than in babies born multigravida (p value 0.02). The DLP point feature on LUS showed statistical significance among babies delivered through LSCS when compared to babies delivered vaginally (p value-0.01) (Table 2).

Table 2. Comparison of DLP with the mentioned characteristics.

On comparing the clinical features with DLP, nasal flaring (p value-0.02) and intercostal retractions (p value- 0.05) was statistically significant whereas SCR was not found to be significant (p value-0.89). The demographic variables on comparison with LUS indices of A-line and B-line did not show any statistical significance likewise the clinical findings of respiratory distress like nasal flaring and intercostal retractions was not statistically significant with the observation indexes of A-line and B-line.

The incidence rates of TTN are from 4.0% to 5.7% among term infants and 10.0% among premature infants [22]. Though TTN is mostly a self-limiting condition, treatment is mainly supportive with provision of supplemental oxygen, as needed. More severe cases may respond to continuous positive airway pressure (CPAP) to improve lung recruitment.

Levine et al. [23] stated that respiratory conditions which prompt admission to the NICU (ie, persistent pulmonary hypertension and transient tachypnea) were almost threefold greater in the elective cesarean group than among vaginally delivered neonates. Our findings confirm this risk of TTN being significantly more in babies delivered via cesarean section. Tutdibi [24] indicates that TTN is strongly related to elective cesarean section and low GA.

Male sex was regarded as significant risk factor for respiratory distress (p-value.0.026) by Hameed et al. [25], and same finding was reported by Ingemarsson [26] and Rawlings [27] In our study, 40 babies born to primi mothers showed a statistical significance (p value-0.02) when compared to babies born to multi gravid mothers while Hameed et al. studied the respiratory distress (RD) in term infants, showed that RD was more in babies born to multigravidas but was not significant (p value-0.73). This aspect may require further evaluations.

According to Liu et al. [28], the main ultrasonic imaging features of TTN include DLP. The sensitivity and specificity of DLP for the diagnosis of TTN were 76.7% and 100% respectively. Similarly DLP was found in majority of our cases, 53 neonates constituting 81.3% of our study population. It is estimated that over 70% of infants with TTN are clinically misdiagnosed with RDS. Based on the previous literature reports [29-31], lung consolidation with air bronchograms without DLP was the primary ultrasonic feature of RDS, whereas DLP without lung consolidation was the most specific ultrasonic feature of TTN. In a prospective cohort study of 59 neonates with respiratory distress, Vergina et al. identified that the sensitivity and specificity of lung ultrasound for TTN were 93.3% and 96.5%, which were higher than 89.4% and 91.3% for X-ray, respectively. Thus, current evidence on lung ultrasound for the diagnosis of TTN is accurate and reliable [32,33].

In conclusion, the results of our study further demonstrate that LUS can accurately and reliably diagnose TTN. It has advantage that it cannot be duplicated by chest computed tomography or CXR examination. The lung ultrasound has many advantages. First, the ultrasound can be performed at the bedside, being non-ionising. Second, the ultrasound is easy to operate, and can be repeated several times a day without hazards to the operator or the patient. Third, this is a low-cost technique, which requires only elementary skills. Last but not least, the lung ultrasound has very high accuracy and reliability in diagnosing pulmonary disease. Given all of these, this method could replace radiography as the first-line diagnostic approach in neonatal period.

We acknowledge that our findings have limitations that restrict the immediate generalization of our results. We believe that investigating lung ultrasound changes in a neonate with respiratory distress is a clinically relevant topic for a separate study. We hope that this will help clinicians become acquainted with LUS and will accelerate the extensive application of LUS in children.