Background: Neonatal sepsis with its high mortality rate still remains a diagnostic and treatment challenge for neonatal health care providers. Sepsis represents an oxidative stress condition when occurs in neonates due to rapid changes in tissue oxygen concentrations with immature antioxidant mechanisms. We aimed to study the serum levels of oxidants and antioxidants among term neonates with sepsis.

Conclusion: There is strong evidence of involvement of oxidative stress in neonatal sepsis, mainly NO, MDA and TAO, and could be helpful in its diagnosis. Also, targeting of therapeutic strategies towards the pro-oxidant pathways may be beneficial in neonatal sepsis.

Sepsis is one of the common leading factors of neonatal morbidity and mortality. Oxidative stress together with inflammation is involved in neonatal sepsis with subsequent impairment in organ functions and death [1]. Early onset neonatal sepsis (EOS) defined as a positive culture (blood, urine obtained by suprapubic tab or in- and- out-catheterization or cerebrospinal fluid) occurring on day of life 1, 2 or 3, while late onset sepsis (LOS) defined as a positive culture occurring between day of life 4 and 120 [2].

The oxidative stress (OS) was previously defined as an imbalance between reactive oxygen species (ROS) and endogenous antioxidant power with subsequent lipid peroxidation, DNA damage and protein oxidation [3], but recently OS has been referred to the imbalance between the oxidants and antioxidants in favor of oxidants that results in molecular damage or redox signaling arrest [4].

Oxidative damage from pathologic conditions such as sepsis have serious effects in pediatric patients more than in older people due to the lower functional reserve and the requirement for subsequent growth of tissue to follow normal development [5].

The current case-control, hospital-based study has been conducted on 60 full term newborns with sepsis in addition to 30 healthy newborns as controls, recruited from NICU of Pediatric Department, Al-Azhar University Hospital, Assiut, Egypt, in collaboration with Medical Biochemistry Department, Faculty of Medicine, South Valley University, Qena, Egypt. The study has been approved by Al-Azhar University Hospital's Ethics Committee, Egypt. A written informed consent was obtained from all the participants' parents before involvement. The study period was from September 2016 to August 2017.

All full term newborns who admitted to NICU and presented with clinical suspicion of sepsis and proved by hematological (leucocytosis, neutrophilia with or without thrombocytopenia, CRP>6 mg/dl, ESR>15 mm after the first hour) and/or bacteriological (positive blood culture) laboratory workup were eligible for the current study, while those with congenital malformation, meconium aspiration, gastro-intestinal obstruction, congenital heart diseases, inborn error of metabolism, or respiratory distress syndrome were excluded. The parents of the included patients were subjected to history taking with special concern on prenatal history (maternal diseases, pre-eclampsia, congenital infections, maternal fever, rupture of membranes more than 18 hour), natal history (mode of delivery, Apgar score 1 min and 5 min, resuscitation measures), post-natal history (respiratory distress symptoms, convulsions and other neurological symptoms, or NICU admission of any of their siblings), gestational age assessment using New Ballard Score method and pregnancy date [6].

Two ml of venous blood samples were drawn from every included neonate at the same day of life from both groups and introduced on plain tubes and were centrifuged at 3500 rpm for 15 minutes. Separated serum from each tube was divided into aliquots using 1 ml cryotubes and was stored at -80°C until the biochemical analysis in the form of measuring serum malondialdehyde, nitric oxide and total antioxidant capacity using colorimetric methods (Chem-7, Erba diagnosctics, Germany).

Data were analyzed using STATA intercooled version 12.1. Quantitative data was represented as mean ± standard deviation. Data was analyzed using student t-test to compare means of two groups. When the data was not normally distributed Kruskal Wallis test for comparison of three or more groups and Mann-Whitney test was used to compare two groups. Qualitative data was presented as number and percentage and compared using either Chi square test or fisher exact test. Pearson correlation analysis was used to identify correlation. Graphs were produced by using Excel or STATA program. P value was considered significant if it was less than 0.05.

Baseline characteristics of the included neonates

Hematological and bacteriological evidence of sepsis 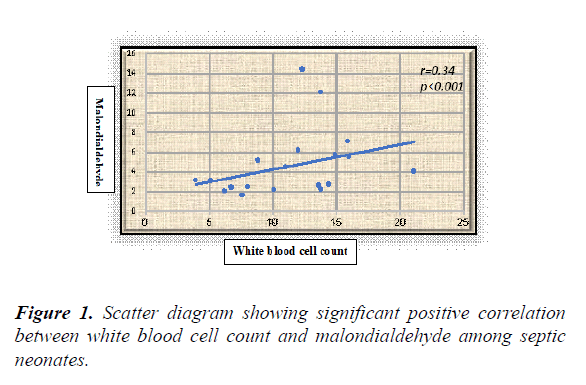 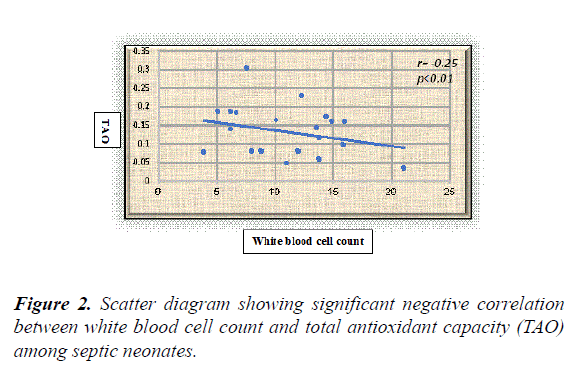 Morbidity and death from bacterial infections represent significant portion among neonates [14]. In Egypt, neonatal sepsis is prevalent due to the defective infection control measures, insufficient nursing staff and exposure to adult infection with underestimated incidences [15], in addition to birth condition, pregnancy control or maternal morbidities.

The current study revealed significantly higher percent of neonates with sepsis were delivered through cesarean section; in addition, significant portion of the included neonates with sepsis had their mothers with associated co-morbidities in the form of fever, premature rupture of membranes and urinary tract infection. Our findings were in agreement with many investigators [16-20]. In addition, neonates with sepsis exhibited significantly lower Apgar score at first min than the controls which were in line with many studies [19-22]. This could be explained that neonates with low Apgar score may indicates poor accommodation with the extrauterine life resulting from labour stress and therefore more susceptible to infection as stated by Adatara et al. [19].

A complete blood count (CBC) is frequently used to evaluate the likelihood of infection [23]. In the current study, there were significant higher white blood cell and granulocytes counts, with lower hemoglobin level and platelet counts among septic neonates when compared with controls. These results were in agreement with many researchers [24-26]. Surapanenik and Vishnu [26], reported that the membrane of the erythrocytes in the neonates is frequently subjected to oxidative stress due to pro-oxidant predominance. Cellular products of the micro-organisms enhance platelet clumping and adherence with subsequent destruction and thrombocytopenia [27]. The significantly higher CRP and ESR noticed among the included septic neonates in our study were in agreement with many studies [28-30].

The sensitivity of blood culture is low in neonatal sepsis and many factors may affect is accuracy e.g. timing and numbers of cultures taken, organism concentration, culture medium, temperature, technique, and blood volume [31]. Current study revealed that 42.5% of neonates with EOS and 40% of the included neonates with LOS have positive blood culture with Group B. Streptococci, Staph Aureus, Klebsiella, and E. coli among the most frequent causative organisms. These results were in line with many investigators [32-34].

Immune activation induced by sepsis, will initiate the redox cascade with subsequent production of reactive oxygen and nitrogen species [35], e.g. NO. The present study revealed occurrence of oxidative stress in neonatal sepsis evidenced by significant higher oxidants (NO and NDA) associated with significant lower total antioxidant capacity among the included neonates with sepsis versus the controls, with non-significant difference in the oxidative stress status regarding to onset of sepsis (EOS and LOS). These results were in accordance with many researchers [36-41]. Chuang et al. [42], reported that serum TAO could be used as marker for clinical severity of sepsis, suggesting that its lower levels in patients with severe sepsis could explained by the associated excessive pro-inflammatory cytokines and immune activation in such patients.

No previous studies could be traced in literature regarding the possible cutoff point for serum levels of oxidative stress markers in diagnosing neonatal sepsis. In the current study, serum oxidants (NO, MDA) at cut-off points (0.514 μmol/l and 0.399 nmol/ml respectively) showed sensitivity (96.4% and 95%, respectively) and specificity (93%, 92%, respectively), while serum level of TAO at cutoff 0.591 mm/l exhibited 98.8% sensitivity and 94% specificity in diagnosing sepsis among neonates.

The present study revealed significant correlations between the oxidative stress markers and the immune system activation represented by the white blood cell count as evidenced by the presence of significant positive correlation between WBCs and MDA with significant negative correlation between WBCs and TAO among the included septic neonates. The results of the current study confirm the involvement of oxidative stress in neonatal sepsis with its possible use in sepsis diagnosis when combined with other standard diagnostic tools. We call for trials using antioxidants as adjunct therapy in neonatal sepsis.

Limitations of the study

One of the main limitations of this study is that it does not contain any preterm infancy group. Because due to the deficient and immature antioxidant system, NO, MDA and TAO levels should be compared with septic term and preterm infants. Additionally, the study was performed in term infants and we only evaluated these parameters during sepsis, it would be more useful if these parameters were evaluated at 48-72 hours and 7-10 days of therapy.

No potential conflict of interest was reported by the authors.

• MHH performed the investigations and laboratory workup and writes the first draft of the manuscript.

• All authors reviewed and approved the final draft of the manuscript.